Why do we Resist Doing the Very Thing that Would Help Us?

Why do we resist doing the very thing that would help us?

Steven Pressfield has written a book on the subject of Resistance (aka procrastination) titled The War of Art.

And motivated by Pressfield's quote, "The highest treason a crab can commit is to make a leap from the rim of the bucket," I wrote a blog post titled "Take a Leap." (March 18, 2019), and then, what did I do?

I resisted the one thing known to make life better—Meditation.

Judging from the comments on https://travelswithjo.com, the Take a Leap blog resonates with many people.

And yep, the crab quote is accurate. I looked up. "A bucketful of crabs," says that if one crab tries to climb out of a bucket filled with crabs, the others will try to pull the one on the rim back in.

With humans, I don't think—with few exceptions—that it's the "others" who try to pull us back into the bucket, aka our "comfort zones". Instead, it's our habits and brains.

And let's face it when we first begin to meditate, it isn't fun. Our minds fight us. Our to-do lists grow exponentially, and hunger and thirst kick roars in with a vengeance. It's like trying to put a toddler to bed.

(Thanks to those who commented yesterday on Take a Leap, for it reminded me to leap.) Here's an excerpt:

Have you ever decided to start a diet or spiritual practice, maybe you would like to sponsor a child in some far-off land, or perhaps you wanted to run for office. Maybe you wanted to get married, have a child, or campaign for world peace.

You didn't do it, and the whole idea quickly drifted away.

Are you a writer who doesn't write, a painter that doesn't paint, or an entrepreneur who doesn't begin a venture?

Then you know what Resistance is.

In The War of Art, Pressfield says that Resistance means not doing the work you were meant to do.

And here I am today, doing my oracle by opening a book to a random page, and what did I find"

The book was Ask, and it is Given, the Teachings of Abraham by Ester and Jerry Hicks.

I have followed the teacher Abraham whose speaker is Ester Hicks. I've taken a few of Ms. Hick's workshops and, even by some quirk of fate, ran into Ms. Hicks in a restaurant in Del Mar, California, when we lived in Temecula, California. My daughter had only the week before begun listening to Abraham on tapes. When I pointed out that there was Abraham, she said, "Why did that happen?" My answer was, "To tell us it's working."

Is it working now, dear one? Have we lost the faith? Have we become so discouraged as to leave behind the very thing that would raise us up?

I am speaking for myself.

Imagine a moment of calm. Imagine a few moments when your mind isn't replaying the same thoughts it thought yesterday. Imagine, rather than fighting your mind, you let the thoughts run through without grabbing one and ruminating with it.

And here is the clinker; you don't have to sit in a lotus position. You don't even have to sit. You can do a walking meditation. (Try not to run into anybody, but then, chances are they weren't meditating, and running into them might wake them up.) I was right years ago when I considered feeding the horses, cleaning the barn, and raking the yard a meditation. But you need the calm presence of a horse munching hay to add to the ambiance.

I suggest that instead of running out to clean somebody's barn, you condition your body to know what it's supposed to do. Like, stop thinking. (I have heard that prayer is Talking to God. Meditation is God talking to you.)

Sit comfortably, and place your thoughts on something simple, like breathing, counting, or listening to the faucet drip.

I began with the word "sing." 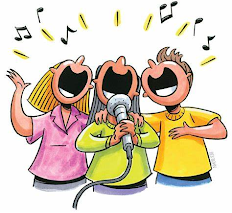 Email ThisBlogThis!Share to TwitterShare to FacebookShare to Pinterest
Labels: crabs, how to meditate, is it working?, procrastination, take a leap
Older Posts Home
Subscribe to: Posts (Atom)