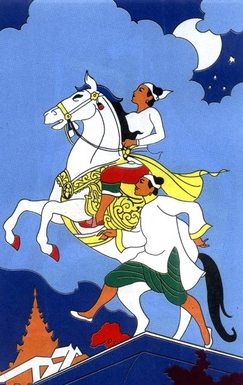 “What you think you become.

“What you imagine you create.” --Buddha

The Gap is the space between where we want to be and where we are.

You’ve probably heard a lot about The Law of Attraction—that we draw to ourselves what we resonate with. The above quote of The Buddha pretty much describes it.

Some days my resonating stinks, so it’s a good thing the Great Spirit is forgiving, or I’d be in deep doo-doo.

Elon Musk is in the Gap with Starship Rocket prototype. That rocket takes off, a glistening silver sliver aiming for the sky, nose up, a blazing trail behind it. The rocket goes to its designated height, beautiful. It lays on its side and slowly descends back to earth, like a little flying squirrel with its side flaps extended. Right before touching down on the launching pad, Starship pulls itself together, turns its nose up again, and slowly descends. Unless it lands squarely on its feet, BAM! It explodes.

Four have exploded. One sat on the launching pad for about ten minutes after flying, with a slow burn happening around its perimeter, then Bam!

You see, each time a rocket doesn’t work, the scientists learn about what isn’t working.

Thomas Edison said he found 1,000 ways not to make a light bulb.

I’m in the gap with a little notebook I wanted to print. My thought was to Print a blank book, people like those little books with pretty covers.

I do. I use bound booklets for my computer data. And they can be journals, or whatever you want to record, an address book, press plants between the pages, whatever you can think of. Add a few quotes, and they are more fun.

I wanted lined pages, ha-ha. Trying to get lined pages formatted for a physical book is another story. I’m learning 1,000 ways not to make a booklet. Either the lines are screwed up, or something is wrong with a page, and the launcher shows that I have a blank page.

I’ll get it. I’m determined.

On www.bestdamnwritersblog.com, I spoke to writers. If you’re a writer, you know what I am talking about. You have good taste. You recognize exquisite writing when you see it, but then you look at your own work, “Uh oh. Rats!”

You’re in The Gap.

Keep on. Keep practicing. It isn’t all talent, and what in the heck is talent anyway? Einstein said it’s 90% hard work.

Apparently, people are interested in this old principle now called The Law of Attraction. The Buddha tried to tell us. Ancient scriptures said, “Ask, and you shall receive. Seek, and you shall find. Knock, and it shall be opened unto you.” The Secret tried to tell us. Justin Perry regularly talks about The Law of Attraction on YouTube, and he has over a million followers.

I used to hate it if things were going badly when someone would ask me, “What did you do to create that?”

That question was rubbing salt in the wound.

If The Law of Attraction was as simple as some make it out to be, we’d all be rich, beautiful, and abundantly happy. My twelve-year-old grandson scoffs if he hears us talk about it, for I think he has the idea that we mean just ask, and it will show up at your door. Maybe it will, perhaps it won’t. It is not as simple as that.

We’ve thought or asked or prayed for many things that didn’t happen, and a good thing too, sometimes we change our mind. And then we thank the great powers that be that that asked for something didn’t happen.

Contradicting thoughts, exist in the gap chasing away your desired outcome.

In the gap are subtle, unconscious, emotional components. That’s the reason attracting what you want is so tricky.

The Buddha said, “What you think you become.

“What you imagine you create.”

He said that about 500 years before Jesus, before Mohamad, before Krishna. Before, the new thought gave us the idea that thoughts create.

We know, stories become exaggerated over time, but perhaps there is still a kernel of truth. It is said that Prince Gautama, who become the Buddha, had a favorite white horse named Kanthaka, who it was said to be 18 cubits in height. (Eighteen hands in measurement is a tall horse—18 cubits would be outrageous.) No matter. Kanthaka and the Prince proved to be a formattable team in contests such as horse-rider ability, archery, and sword fighting—a prince had to prove his metal. Kanthaka pulled the chariot Guatama, and his servant Channa used to ride through the city while Channa showed the Prince the ways of the world.,

The Prince had been sequestered in the Palace for 29 years, hidden from all misery, age, or ugliness. It had been prophesized that the Child Guatama would either become the most powerful of all leaders or leave the ways of the world and seek his enlightenment. His father wanted to keep him to be a leader and so imprisoned him.

Who helped him escape?

Kanthaka leapt the gates and fled with The Prince from the imprisonment of the Palace.

Further embellishment said that the gods held their hands under Kanthaka’s feet so the clatter of his hooves against the stone pavement would not awaken the guards.

In this story, the role of Kanthaka illustrates the reverence, respect, and dependence between horse and human that has endured for centuries.

Although I ascribe to the idea of the Law of Attraction, I know we are still in a physical world. We still have a pandemic; we still have situations, not of our choosing.

We’re in the Gap.

All I can say is, “Be a person worth saving.”

Astronauts made it home safely in a recycled rocket.
P.S. I have 17 blank pages in my booklet, augh!
*The  picture at the top is of Gautama riding Kanthaka with Channa running beside them.
Posted by Jo at 7:23 PM No comments: