The Birds and the Bees

As I sit at the window in the cabin in the forest—a rented cabin, not mine, on this Tuesday, April 12, I am watching great gobs of snow that were heavy on the fir branches a moment ago plummet to the ground. The resultant "Plop" awakens my little dog, trying to sleep on the couch. 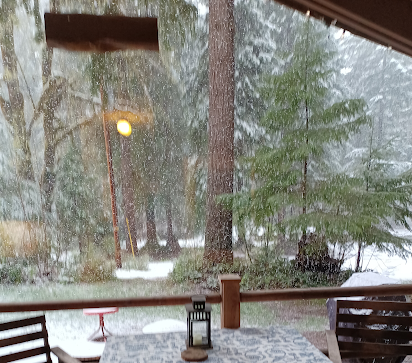 A view from my window.

Oh, here come the flakes again—little white fairies slowly drifting to the ground. I am mesmerized. How do they fall while maintaining a distance from the other? Each flake is synchronized like birds in flight. Although the flakes are on a trajectory, the birds can do right turns or left with split-second timing. I figure there is a commander bird with a radio headset giving instructions to the flock via their headsets.

(My physicist husband will tell me that the flake's distance from each other has something to do with the moisture in the air.) I guess each has its own little packet of moist air around it, as some trees emit a deterrent to keep other trees from crowding in too close, allowing each to his own space.

My own space is one reason I came here.

There goes the newly plowed road the tractor made about 5 minutes ago. The snow is stacking up.

And I thought it was spring. 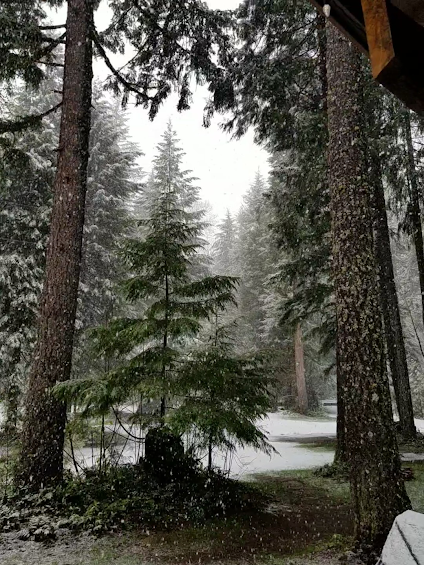 But this is fun, and I came to be among the big trees, so here I am. The weather can do whatever. This is my Artist's Date to follow Julia Cameron's suggestion as something people should take every so often to recharge their batteries. She suggested a weekly date—doing something fun, but I took it to the extreme and took two days. She goes to the pet store and pets the enormous bunny they keep on the premises. First, she asks, "Can I pet Howard?"

"You have to ask Howard," they say.

About a week ago, I watched a friend's video where she mentioned the pollination of the forest. Wait a minute, I don't know how the pines and firs pollinate, and I took Botany in college.  I knew about flowering plants, but conifers are gymnosperms, non-flowering plants, how do they grow pollen?

(My classes were in California, maybe they skipped the conifer lecture.)

Ferns and mosses have spores on their leaves and thus send babies into the world. But Pines? Where does the pollen come from if they have no flowers?

This morning I found that conifers have male cones and female cones. The male cones don't look like the woody cones we commonly call pine cones but are more furry cones that come in the spring on the tree's lower branches. Why lower?

So they generally do not pollinate their own tree, thus allowing genetic diversity. Instead, the pollen is carried by the wind to other trees. (Perhaps you have parked in the forest to find your car covered with yellow powder—that is pollen.

It takes two years from the time pollen finds a female cone to it making pine nuts. You have probably seen a pine cone where the scales look glued together. They

have not yet opened for that pollen can enter.

After a time, the scales open and an ovule is fertilized, and two seeds mature between the scales. After that, the pine cone falls to the ground. Some ingenious designer created the pine cone so it would bounce and thus disperse its seeds. Since the pine nuts are delicious, critters collect them and bury them for a future meal. Sometimes the animal will forget where they buried some of their seeds, or maybe they had more than they could eat and left some. In that manner, animals plant trees.

Forgive me for the science reminder, but I am in awe that seemingly dead branches bud and develop flowers and leaves every spring. Ground plants make their way through the soil, the grasses turn green, and the world awakens. The plants feed us, give us wood for fuel and shelter, and oxygen for our bodies. We, in turn, provide them with carbon dioxide. What a system.

And this system can remind us, as Eckhart Tolle so eloquently explained, that a "Flowering of Consciousness" can appear in people too.

See, I flipped from being a biologist to being a preacher.

Imagine a time when there were no flowers, and then one day, a lonely little blossom appeared. Soon others came, and the forest exploded into color. Insects were attracted to the fragrance emitted by the flowers. Birds came because of plentiful food, as did bees and hummingbirds. (They star apart, though, for hummingbird's little body can't take a bee sting.) came where the bees weren't to drink their nectar and thus disperse the pollen. The flowers accommodate each, specializing in hummingbird flowers and bee flowers. The bees leave behind honey. The hummingbirds leave behind beauty. The flowers make fruits.

Now I will spend some time contemplating why I really came to the woods.

See ya next week. 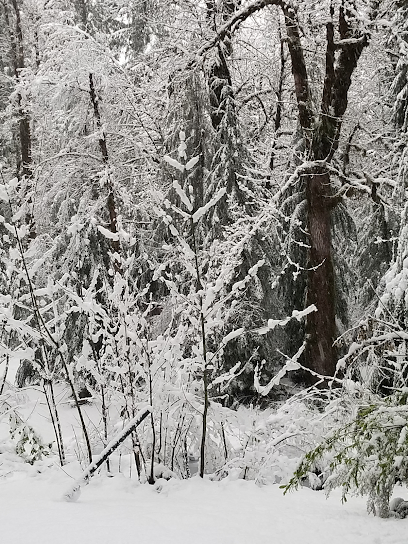