Here's to the Dreamers

More than 50 years ago, in a little Unitarian Church in Riverside California, most of us listening to Martin Luther King’s Taped speeches from the Birmingham Jail, would never have believed that in our lifetimes we would see a black man elected as President of the United States.

Last night I watched and listened to an exquisite interview of former President Barack Obama by a very bearded David Letterman on Netflix.  (The first episode of the show, My Next Guest Needs No Introduction With David Letterman. I was in awe. And it reminded me of the many non-violent marches that went on in the 60’s. One notable one was on the Edmund Pettus Bridge in Selma Alabama in 1965.

In a speech at the base of the bridge President Obama said this:

Now, I have to imagine that when a younger John Lewis woke up that morning 50 years ago and made his way to Brown Chapel, heroics were not on his mind.

A day like this was not on his mind. Young folks with bedrolls and backpacks were milling about. Veterans of the movement trained newcomers in the tactics of non-violence; the right way to protect yourself when attacked. A doctor described what tear gas does to the body, while marchers scribbled down instructions for contacting their loved ones.

The air was thick with doubt, anticipation and fear. And they comforted themselves with the final verse of the final hymn they sung…

Then, his knapsack stocked with an apple, a toothbrush, a book on government – all you need for a night behind bars – John Lewis led them out of the church on a mission to change America.

As John noted, there are places and moments in America where this nation's destiny has been decided. Many are sites of war...

Selma is such a place. In one afternoon 50 years ago, so much of our turbulent history -- the stain of slavery and anguish of civil war; the yoke of segregation and tyranny of Jim Crow; the death of four little girls in Birmingham; and the dream of a Baptist preacher -- all that history met on this bridge. 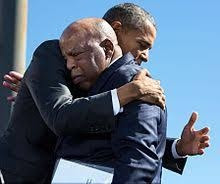 Obama and Lewis
--In honor of “Bloody Sunday,” when State Troopers attacked about 600 peaceful marchers with Billy clubs and tear gas when they attempted to march from Selma to Montgomery to lobby for voter’s rights.

John Lewis was 25 when beaten severely about the head during the bridge crossing, but when on to become a representative in the Government.

Obama goes on to say;
It was not a clash of armies, but a clash of wills; a contest to determine the meaning of America.

And because of men and women like John Lewis…Dr. King, and so many more, the idea of a just America, a fair America, an inclusive America, a generous America – that idea ultimately triumphed.

And we, the people, lived to see Martin Author King Jr’s “I Have a Dream” speech spill out covering America. 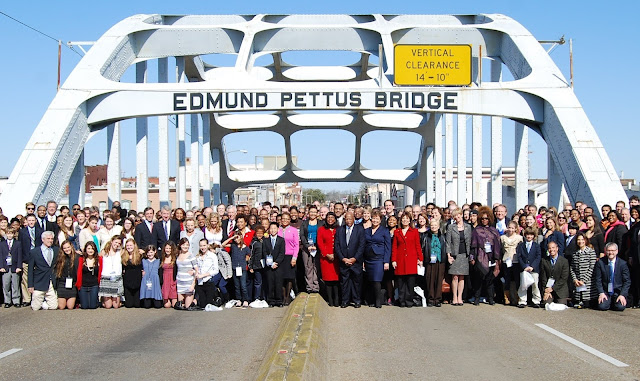