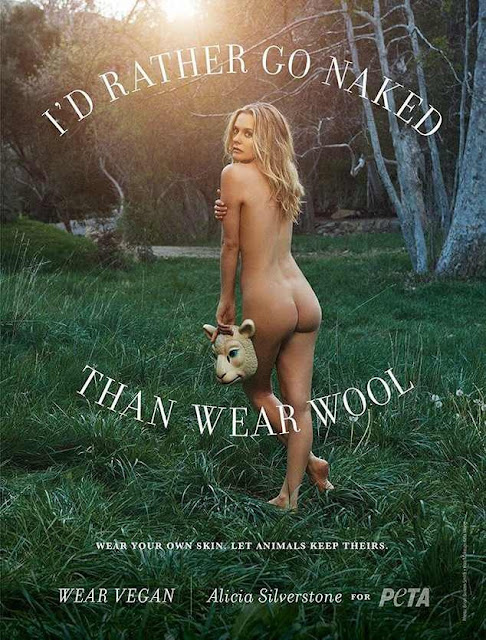 A couple of weeks ago, my husband and I came upon this billboard, the size of a small house, while on Burnside Avenue in Portland Oregon.

“What! No, Alicia Silverstone, it’s FUR, not wool.”

I was wrong.  She meant wool.

“What’s wrong with wool?”  I go out of my way to find wool clothing, and wool socks are the best.

Well, Silverstone is objecting to the inhuman treatment of animals, in this case, sheep.

HEY, I LOVE ANIMALS!  I use wool because it does not kill the animal, but neither do I want them harmed. I know that sheep are quite docile and if a handler is gentle; the sheep will lie there quietly during the shearing process. SO, FOCUS ON GENTLE HANDLING!

Get a grip folks! Don't use animals as though they are machines, and don't believe that you are God's gift to stewardship with no heart.

If you harm the animal you lose your job. Period. Isn't that more plausible than to stop using wool?

If you don’t shear sheep they will turn into a mass of burrs tied up in a fur-ball. And remember, they grow a new coat. That’s the nature of wool. If you stop buying wool, farmers will stop raising sheep, and all those cute little lambs will not be born.

When I was a kid, we lived on a rural property in Oregon, and we had a beautiful grey cat with abundant long fur—not a good idea in the country. He turned into a mat of fur as though he was wearing a rug, so one summer we clipped him. And underneath we found that he had foxtails (the barbed seed of the foxtail plant) stuck in his skin under those mats. Without those fur mats, that interfered with his fur washing, and foxtails that stuck into his skin like needles, he frolicked like a kitten.

And he stopped traffic.

We  had sheared him like a lion with a furry mane and tip of fur on his tail.

But then, naked Silverstone got people’s attention. Including mine.
Posted by Jo at 2:03 PM