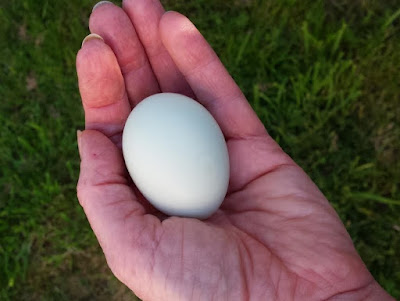 The incredible edible egg. And from my chicken!

As I held that egg in my hand this morning a new awareness sprinkled on my head. Life’s simple pleasures. We know about chicken eggs. We have seen them our entire life, but not this egg, not this day, and not from my talented chicken.

That little egg, so perfect, so pretty, so contained. Wrapped in a shell durable enough hold up its own momma. I have three hens that give me three eggs a day. Imagine producing enough protein each day to make a chick. (My chicken’s eggs, however, are not fertile.) I keep telling a non-farm-familiar friend that you don’t have to have a rooster to get eggs, but somehow she doesn’t believe me. Fertile or not that chicken still produces an egg a day. I hope my little hen doesn’t feel like she is giving birth daily.

Last year when I found a potato under the soil I felt that I had found gold.

A gardener is like an orchestra leader who waves his arms in the air and music springs forth—or in the gardener’s case, veggies.

I went to the Farmers Market here in Eugene last Saturday, the second Saturday they were open, and they had produce!  In April! They know something I don’t.  Greenhouses maybe? Winter gardening? The carrots, radishes, and beets were tender and sweet, a cut above anything I have tasted in a long time. (Organic, with no bug chomps visible. Imagine.)

Once long ago when I lived with my parents on their fruit farm where they raised cherries, peaches, and apricots, a man and his wife stopped by to purchase peaches. We gave one to the lady, and she fell into peals of ecstasy. “This is the best peach I have ever eaten.” A tree-ripened peach. Huge and juicy. My mother thinned the fruit, sending little green peaches tumbling to the ground in a steady staccato. The ones left on the tree were remarkable.

Isn’t it fascinating that we can go bopping along, okay we say, life’s good, I will be positive, then something hits us. Like what just happened to me.  I looked up Elberta peach and found that once this “Old fashioned” peach was the standard for a canning peach, but it has been phased out. Tariffs on imports made domestic canning prohibitive.  Rats.

A tree-ripened peach? You will go a long way to find that, and I guess you may never find an Elberta.

I was trying to counteract the maelstrom of sad news that can bombard us daily by looking at life’s simple pleasures, and I got hit. It happens. I read recently that many people feel cut off, stressed out and discouraged. We are connected to the world, yes, but our brains are not built to have all the ills of the world run through them on a daily basis. And for me, today, it was all about a peach.

"All is not lost, however. We found canned Elberta peach preserves online at www.dickinsonsfamily.com. For a crop closer to home, you can plant an Elberta peach tree; varieties are available by mail-order from Stark Brothers Nursery (starkbros.com). And George Noroian still has a limited stock of canned Elberta peaches to sell in boxes of two dozen 28-ounce cans for $60 plus shipping. Call him at 559-591-7044."

I didn’t know when I started writing this where it would end.

Okay. I opened #Zig Ziglar’s, book #Over the Top, and found this:  Regarding positive thinking, he said, “Switch it on” It is like a light switch in a dark room. The electricity was there all along.

I can hear someone say, “You are just pouring syrup on crap.” Probably, but it feels infinitely better than staying stuck in the crap.

In the previous paragraphs, I was letting my fingers do the walking. It’s like life, sometimes we are walking along and our foot lands in a mud puddle with axel grease floating on top.  Wipe it off. Let’s get on with it.

I wanted to tell you about my book, The Girl on the Pier.

I am reassured by #Anne Lamott (Bird by Bird) who says everybody writes shitty first drafts, except for a few and we hate those people. And since we create God in our own image, He hates them too.

And now for an offering an invitation and an imposition; you are, after all, my chosen people. And this is not my first draft.

Michael Larson, the former agent I heard in Central Point a couple of weeks ago, encouraged us to join a writer’s group. I was tempted. That was until I read Sharyn McCrunb’s comment: “I’m not showing my novel to anyone not prepared to write me a check.”

I also heard that writers groups like to rip and tear.

I don’t have time for that, even if it's good for me.

Since you are my select few, and I need someone to tell me if I have more than a few strands of spinach stuck in my teeth, perhaps one, or more, or you would like to read the manuscript. You don’t even have to write a check, just tell me if you think The Girl on The Pier is viable. (Actually, she’s dead, but she is only a painting, not the hero.)

It would come to you as a document file.

No checks to be written, only request it, and viola’ steamy fun.

Recently I was visiting my artist friend June, and there on her wall was one of her early paintings. (June is 92, drives, is out of the house most every day, going to painting classes, movies, out to lunch.) Her painting showed a girl from the back, dressed in a filmy flowing garment as mine is, and looking out to sea. She was not standing on a Pier, but she had the same ethereal haunting feel as my girl. I must go back and beg and plead that she will let me take a picture of it.

Perhaps that would work as cover art.

If you want to be an early reader, and check my teeth for spinach, just ask at jewellshappytrails@gmail.com

The Girl on the Pier is a love story.

The Girl on the Pier is a painting.

When Sara Andrews and Ryan Walker find each other at a sidewalk café in SoHo New York, it is fireworks. When they become embroiled in the mystery of the painting The Girl on the Pier, it takes them halfway around the world.

And then driving home a couple of days ago... 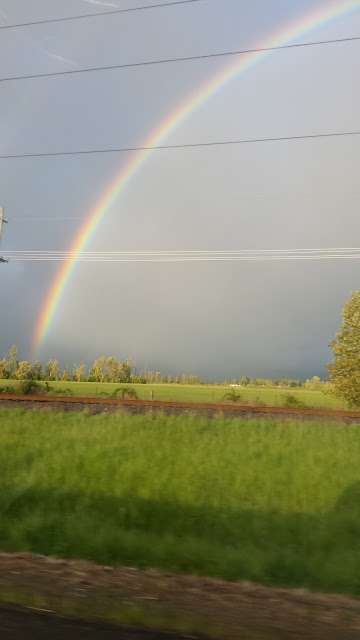