In Praise of Goats

Orville and Wilbur with a rider, Oregon 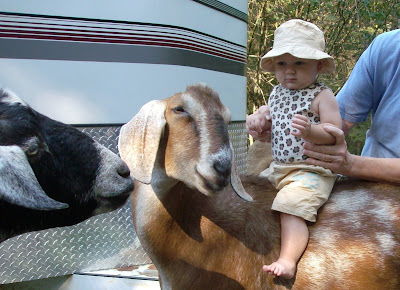 Little Boy Darling with Do and Re, Hawaii 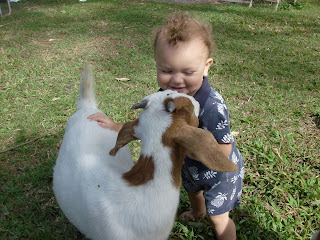 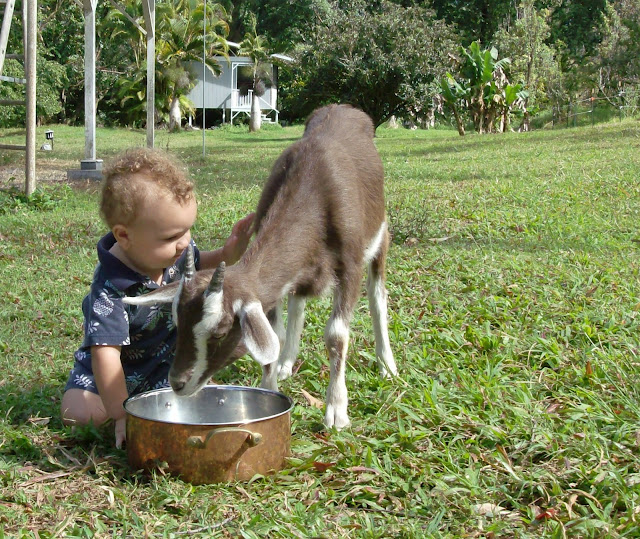 If you have never met a goat you might not imagine how sweet they can be.

The subject of goats came up for me when my daughter told me about the #Weston Price Conference she attended last week in Los Angeles.

It was a food conference, and you might wonder how the subject of goats came into the conversation. No, don’t eat them.  Use them. One of the presenters was a farmer. And he said we need more animals on our properties.

I began thinking about Orville and Wilbur our free-range goats, who came running from the forest every morning to dive into the horse’s hay. They talked to us, followed us, came when called, and hiked with us. They kept the brush cleared around the house, and they never damaged anything. Well, they would have eaten all ornamental plants and flowers, but everything not wild was behind a deck railing.  The house was fenced in the goats were fenced out.

One thing the farmer said about goats is that they are problem solvers, and they use that ability to get out of fences. They use that ability, too, to climb on anything fun, but we didn’t have that problem with Orville and Wilbur, as all temptation was out of reach, and we lived in the forest. They were perfect.

When we moved to Hawaii we bought two little nannies, Do and Re, still on bottles when we got them, and the only time they were penned was in the dog kennel when we were away from the house over night. The rest of the time they were free-range, as sweet as kittens, and kept the property trimmed as though we had hired a ground crew. They came when called and hiked along the “green trail of bliss” with us.

There was a star fruit tree close by the house whose fruit tasted terrible (another tree in the orchard tasted great, I don’t know why the difference), but the one by the house dropped fruit on the ground leaving a mess—not after we got the goats, they erased all evidence of ground fruit. And you don’t have to worry about goat poop, it’s like a deer’s, pelleted, and when dropped into the grass it disappears.

A downside was that we had to enclose anything that could be climbed upon, the boxes in the storage shed, the Prius, and the tree in the front yard. So I suggest penning in the house and leaving the goats free. They will stay close, they like people.

The conference speaker said that people are desert makers. If ground is scraped bare in a dry arid climate, like Africa, the ground can heat up to 140 degrees where no plant can survive.  With animals and grass and grazing, the soil will be about 70 degrees, perfect. The grazing animals will nibble the grass encouraging it to grow. One must not allow them to over-graze however, but rotate them to different pastures. And goats, being browsers, will keep the brush cleared. In Oregon they can clear out blackberry bushes that left to their own devices will  over run an entire acre—or more.

The farmer showed two pictures with the caption, “Which picture had the rain?”
Neither.

The green land had animals, the dry one didn’t. 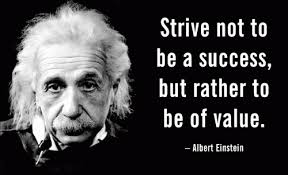 Up to Chapter 10 on oneyearontheisland.com
Posted by Jo at 4:29 PM