A Fifty to One Long Shot 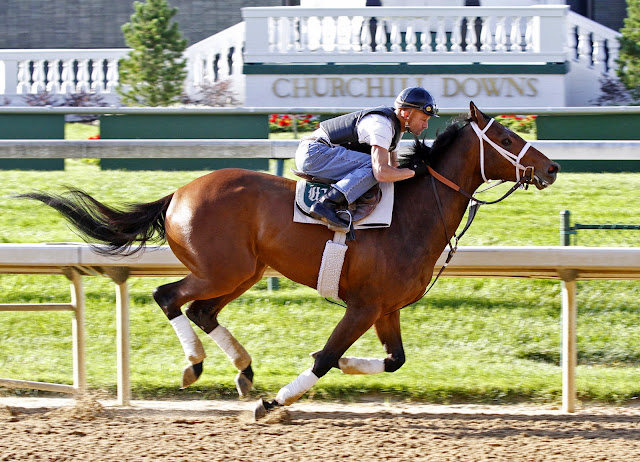 I don't limit my wishing to white horses--sometimes I bet on the bay.

Last night I was so inspired I almost fell off the couch.

How I missed it the first time around is beyond me.

I have been a Kentucky Derby fan for years—chose the winner three years running,--on paper, didn’t bet, but I stopped watching for a time after they kept breaking horse’s legs. I was mad that they race three-year olds whose legs are not fully formed. They race them because as youngsters horses are fast.  So, race them as older horses that have strong legs. It’s idiocy. You still have an even racing field. People, though, are concerned with numbers and speed, and sometimes they miss the big picture. And if you want to race in the Derby you must obey the rules.

So, in my discouragement with the Derby race, I missed the 2009 Kentucky Derby where Mind that Bird, was a 50 to 1 long shot. Mind that Bird won the race for two cowboys who didn’t even know the horse qualified, and it was the biggest shock in Kentucky Derby History. Mine that Bird came from dead last, way last, way behind the pack, but in a burst of speed passed every horse on the track, and won by 5 lengths. The announcer wasn’t even watching the horse, so discounting him he was.

I watched the movie last light 50 to 1, loved it, and decided not to be discounted, and to encourage those around me to do the same.

So how do we motivate people? By crititiques? “By criticism?

"Develop a think skin," they say.

Charles Schwab, United States Steel Company, 1927, said, “I have yet to find a person, however great or exalted his station, who did not  do better work and  put forth greater effort under the spirit of approval than he would ever do under a spirit of criticism.”

Schwab was not paid a million dollars a year (in 1927 yet) because he knew a great amount about the production of steel. He was hired because he knew how to motivate people.

They say that the second most need in people, behind health, is to be appreciated.

If you choose to share what you are up to, or say what you would like to see here, you are invited to copy and paste my personal address. That way it will not go to a robot, and you will not need a password. Don’t you have more of those than you can shake a stick at?

JDwritersblog@gmail.com
(Copy and paste if you do not want to go through the rig-a-mo-role of a sign-up.)

Now, I expect greatness from you.

P.S. 50 to 1 is available on DVD. It was a labor of love for the director who directed Dances With Wolves and Bodyguard, and the jockey was played by the real jockey who won the Derby on Mine that Bird—a horse with a personality.

Note:Wish on a White Horse has a new address it is http://www.wishonwhitehorses.com
Posted by Joyce Da
Posted by Jo at 12:21 PM