This Takes “Going With the Flow” to a Whole New Level 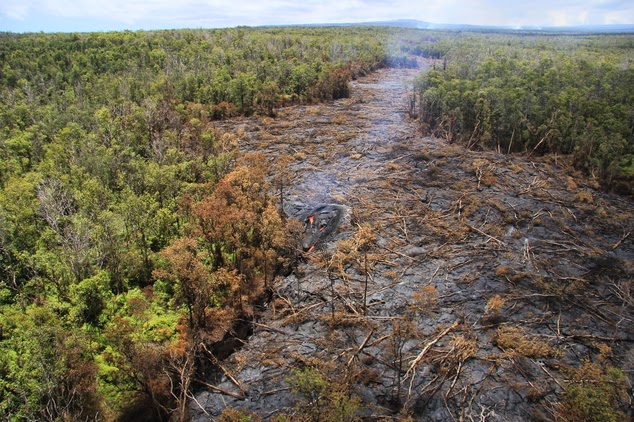 Another reason we beat feet out of Hawaii.

The above photo is of Lava flowing through the jungle of Hawaii. It is on the West side of the town of Pahoa. We lived on the East side.

Here is a thermal image of the lava flow taken last week. 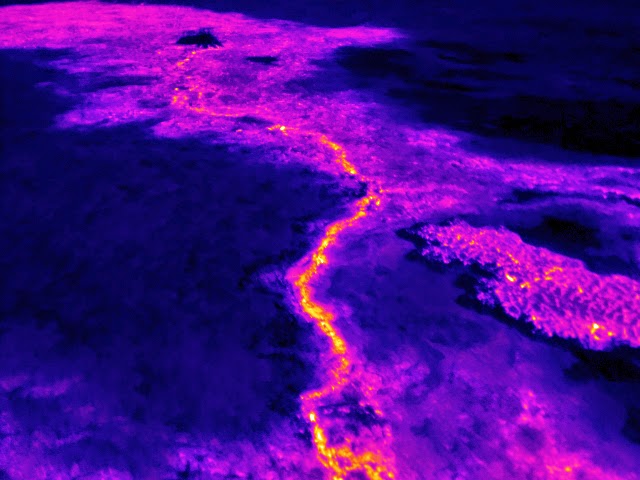 And from the distance we see... 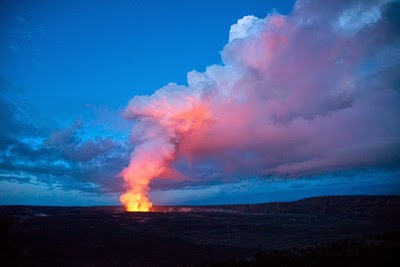 Don’t get me wrong you can have a dream vacation in Hawaii, air soft as silk and laden with the fragrance of plumeria blossoms, beaches picture postcard perfect, and hotels that provide service to satisfy the most persnickety of tourists.

And then, there is Pele--the goddess of the volcano.

We got a firm directive to move off the island. Whether it came from Pele, from our observations, from our intuition, whatever, the message came loud and clear: “Get the heck off this island.”

First Pele, fickle lass that she is, told us to leave, and then as we were doing it, she threw a road block in our path. Some poor guy tipped over a tanker blocking the road. "It will take half a day to clean up the spill," said the flag man.

So we backtracked the 40 miles to Hilo, took Saddle Road over the mountain, white-knuckled it over the one-lane road, through single traffic bridges, and across a barren landscape that looked like Utah. We needed to be at the airport in Kona by 9 a.m. to deposit Bear, daughter’s 150 pound Newfoundland dog, into the one plane that would take him.

While that adventure is a past memory, the idea of going with the flow is still alive and rattling around in my mind.

In San Diego I asked a friend what "Going with the flow," meant to him. He reached onto his bookshelf--knew right where it was--pulled out a book and thrust it into my hands. It was Finding Flow, by Mihaly Csikszentmihalyi (“chick-SENT-me-high”).

There I found this story:

There was a mill worker named Joe.

The men in the warehouse where Joe worked spent their days in a dirty building bombarded  morning until night by the loud clanking of machinery. They watched the clock while waiting anxiously for the closing whistle.

At the end of the day the workers would rush off to the pub to rid themselves of the horror that was their day.

Joe had learned to repair most every piece of machinery from the huge mills down to the computers. He loved his job and was respected by his peers. At home he and his wife had built a beautiful garden complete with fountains that made rainbows day and night, day by sun, night by artificial light.

What was the difference between Joe and the other mill workers?

Csikszentmihalyi says it was, “Being in the flow.”