Why Do Things Fall Down?

I’m struck with a need to appreciate life.

One might say we do, but mostly appreciation is not the most circulated sentiment.

There is a lot of complaining and fear, so it would appear that there is not much to be happy about. We’ve hunkered down for some time, and it has changed people. From what to what? I don’t know.

Let’s look out there at spring bursting with sunshine and flowers.

Yesterday I needed to drive to Florence, Oregon and became so hungry, it seemed that a hamburger was the one thing that would fix it. It did. I relished every bite, as did Sweetpea, who ate a hamburger patty all her own. We sat under this magnificent tree so full of flowers I could almost hear it laughing. 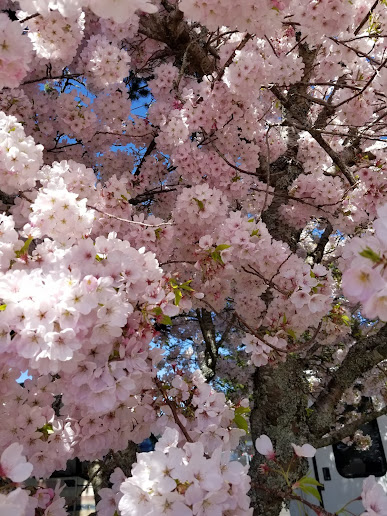 After my appointment, Sweetpea and I found a strip of sand by a bay—not the open sea, there were only a couple of other people there, and she could run leash-free. She ran in circles, laughing as doggies do when they are having fun, and chased balls of sand kicked up by her toenails. When we reached the giant boulders that marked the end of the beach, both of us sat and looked out over the blue water and blue sky and watched a border collie, the white tip of his tail flashing, down the beach running after a ball, and chase it into the water.

We were lucky to have been born.

I remember Ray Bradbury once said if after you die and you were granted a moment back on earth, which would you choose. He would say,” Any one.”

I say some moments are better than others, but I appreciated that he loved life that much.

You know how you will have a book lying around unread until one day you decide to read it and go, “Wow, why did I wait so long?”

It is a strange phenomenon with human beings. We often resist the very thing that is best for us. Maybe it’s “When the student is ready, the teacher will appear”…or maybe it’s procrastination.

I am talking about a specific book loaned to me by my nephew, and I let it sit until I was about to visit him and figured it was time to return the book. Driven by the desire to see what I was missing, I picked up the book, and began to read.

The book was Seven Brief Lessons on Physics by Carlo Rovelli. It sounds a bit heavy, but it’s not. It’s fascinating. The lessons were written for those who know little or nothing about physics.

It begins with one way to create genius.

As a youth, Albert Einstein spent a year aimlessly loafing.

How cool is that?

He was in Pavia after abandoning his studies in Germany and joining his family. Einstein was reading Kant and attending occasional lectures at the Pavia University—for pleasure, not for grades.

Thus, are geniuses made.

He did eventually enroll at the University of Zurich to study physics. A few years later, he sent three articles to the most prestigious scientific journal of the period, the Annalen der Physik. The first shows that atoms really exist. The second lays the foundation for quantum mechanics. The third was his first theory of relativity which shows that time and speed are interrelated. All, according to Rovelli, worthy of a Nobel prise.

Rovelli, the author of the book I was reading, in the last year of his university studies, spent a vacation on the beach at Condofuri in Calabria emersed in the sunshine of the Mediterranean Sea. He was undistracted by school, which, he said, was the best way to study. The book on his lap was mice-chewed, for he had used it to block the holes in his hippish-house on an Umbrian hillside.

Every so often, he would lift his eyes to the glittering sea, and it seemed that he could actually see the curvature of the Earth. As if by magic, as if a friend were whispering in his ear, he understood that reality is not what it appears to be. Another veil had fallen.

He thought of Newton’s desire to find out why things fall down. Newton, in a moment of enlightenment, determined that space is no longer something distinct from matter—it is one of the “material” components of the world. It undulates, flexes, curves, twists. “We are not contained,” wrote Rovelli, “within an invisible rigid infrastructure; we are immersed in a gigantic, flexible snail shell. The sun bends space around itself. Earth does not turn around it because of a mysterious force, but because it is racing directly in a space that inclines, like a marble that rolls in a funnel.”

All things fall because space curves.

Have you ever thrown a penny into one of those funnels they often have at fairs? You throw it in, and it circles round and round, gently rolling down the walls of the funnel until finally, it drops into the hole.

See how magnificent the Universe is, and we are a part of it.

Remember The words of the Shawnee Chief Tecumseh:

“When you were born, you cried,

And the world rejoiced.

so when you die

the world cries and you rejoice.”