There Lived in the Land a Handsome Prince

When I was away from the house, my husband opened the front door for Gabe, our Rottweiler.

Outside the closed door, mayhem ensued. A motorcycle had zoomed up a hill that intercepted our street. Well, a motorcycle is to a Rottweiler as a rabbit is to a coyote.

Gabe chased the man who was frantically maneuvering his bike to avoid clashing with the dog until he finally out-ran the dog.

I knew nothing of this until two days later when the man knocked at our door and explained it to me. (Neither did my husband.) He said he had a young daughter and was afraid for her, and rightfully so. I said, "I would trust Gabe with my life, but I will never let him out the front door and will keep him on a leash." That seemed to satisfy the man as I stood there quaking that he may demand some disciplinary action.

A few days later, the man came to our street when I was walking Gabe and proceeded to make friends with him.

The man would often see us on the street, where he would drop to one knee, hold out his arms, and let Gabe run into them. I learned that the man was a Navy SEAL.

I recently read about the rigorous training of Navy SEALs, including a 5-day sleep deprivation to prepare them for battle. Knowing how rigorous their training was, I was all the more impressed with how this man humbled himself and made peace.

I wouldn't have chosen a Rottweiler, and I didn't. He chose me.

Gabe came to us as a juvenile, almost full-grown but still with that slender gangling look of a young dog. He just appeared at our door one day. I tried to find a home for him, including tacking up posters around the neighborhood. Finally, after a week of no response, he became my dog.

I named him Gabriel because I said he was my guardian angel.

He had some sort of skin condition that the Vet said was caused by stress.  (Being homeless can do that to a dog or a person.) He prescribed shampoo that cleared Gabe's skin, and love and a home cured his stress.

Most every morning, Gabe and I would run in the forest across the street from our house. Although we lived in a residential area of Eugene, the university-owned the land across the street, and it was left wild.

Gabe would ride with me in the car that had a fabric headliner. And since he liked to stand on the console between the seats—pushing me to go faster, I figured, his head would brush the car's ceiling. So, one day, tired of trying to remove black hairs from the vehicle's fabric headliner, I put a Babushka on him.

How cute was that?

We were building a house in Marcola, and Gabe and I would regularly drive to the building site. If I stopped along the way at a drive-through for coffee or whatever, he would wait patiently for a dog biscuit. He soon learned that all drive-through windows ought to give out dog biscuits. After waiting patiently, if a biscuit didn't come through that open window, we would give them a good piece of his mind by barking as we drove away.

On one such trip to the house, smack dab in the middle of Marcola, Gabe saw a dead dog lying alongside the road. He did a quick double-take and looked quizzically at me. Surprised that he recognized the situation, I said, "Yes, it's sad, isn't it?"

During this time, my daughter lived in California, and on occasion, when she was sent on a trip, Gabe and I would drive down and take care of her critters. Her dog was a Great Dane. When I took a walk with those two dogs leading the way, I felt like I had a team of horses in front of me. Luckily, they kept together and didn't go their separate ways.

On an evening, as the Valley River shopping mall parking lot had nearly emptied, I led Gabe to the car when two men walked past us. I heard one say, "Not with that dog, I wouldn't."

I figured that day Gabe lived up to his name Gabriel. 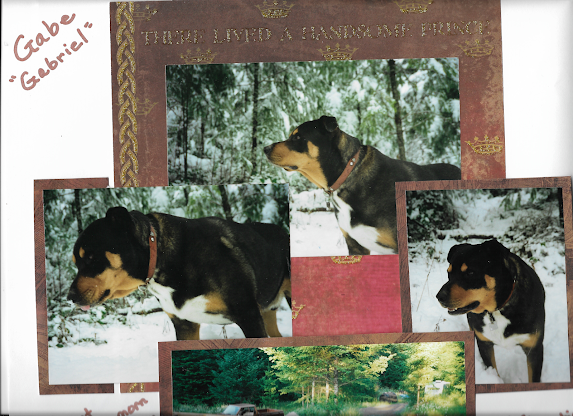 There lived in the land a handsome prince, from my scrapbook.

“You will never get any more out of life than you expect. Keep your mind on things you want, and off those you don’t.” --Bruce Lee

Although Bruce Lee (November 27, 1940–July 20, 1973) is best known for his in martial arts and film, he was also one of the most underappreciated philosophers of the twentieth century, instrumental in introducing Eastern traditions to Western audiences.

He always carried a tiny 2 x 3” pocketbook with him which he filled with training regimens, poems, affirmations, and philosophical reflections. Images of his notebook that are perfectly readable, can be found at Bruce Lee’s Never-Before-Seen Writings on Willpower, Emotion, Reason, Memory, Imagination, and Confidence – Brain Pickings