I've been consulting with Prince Charming, our neighborhood peacock this week. He concurs.

When I thought the Covid 19 Pandemic was nearing a close, I blogged the question: "Have we learned what this Pandemic came to teach us?"

Maybe it had nothing to teach us. It was just an event. Man-made or nature-made—you choose.

Maybe its purpose was to bring about diversion and discontent and kill off a few million people.

Or, it could have been an opportunity to learn something about human nature, pulling together, or our shared fears and hopes for the future.

"For in the last analysis, our most basic common link is that we all inhabit this planet. We all breathe the same air. We all cherish our children's future. And we are all mortal."

I've often wondered why the US has become so polarized, and not only the country, but it has trickled down into families. (Hey, I saw The Sound of Music, where Rolfe was willing to expose the Von Trapp family to the Nazis. And that included the girl he had been courting.)

That's how strong ideologies are held.

Reading one side of the diversion will lead you down one rabbit hole (a phrase that pops up frequently now.) If you read the other side, a different rabbit hole appears. And I don't know if those rabbit holes have bottoms. I know, though, that if I followed what you have observed, I would probably think as you do. Ones who think kindness works use kindness. One who thinks violence works use violence.

We must place a governor on out brains, for if we don't monitor what goes into it, someone will program it for us.

We can't help being programmed. It's a part of our nature. Repeatedly tell a person a lie, and they will start to believe it,  even if you tell them it's a lie.

What if, while we are squabbling over here—something more important is happening over there. For example, I saw how more intense hurricanes are occurring in Puerto Rico because of global warming. And residents whose homes have been left in rubble, they can't personally clean up, are preparing for the next big blow.

I saw how miles of sand dunes are fun to surf on but are becoming more widespread on our planet.

I see a view of the earth from space and am alarmed that the thin layer of atmosphere that envelops our beautiful blue planet is only 60 miles thick. If I travel up to a elevation of 10,000 feet, I feel the effects of less oxygen, and that's only 10,000 feet, easily climbable in a day. If you hike the tallest mountain on earth, you will need to carry your own oxygen. You can breathe-barely-but it's unlikely you will have the strength to climb back down. 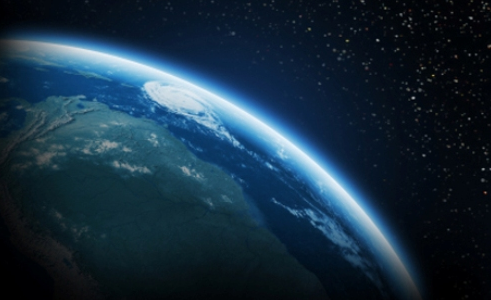 The clear stripe is our Earth's atmosphere.

And, of course, you know about the melting icebergs and how that is changing the ocean (an abundant food source) and wildlife (who have as much right to life as we do.)

"The preponderance of evidence points to humans as the cause of global climate change."

Perhaps we squabble because we believe the big challenges are more than we can handle, or too frightening to consider. For example, there is a RULE OF THREE regarding our need for food, water, and oxygen. Without them we will die.

We could find ways to grow healthy food for the entire earth, study how much humans are contributing to global warming and how much is a natural cycle, and make damn sure our air, air water and food are clean.

Yes, we know courageous souls are addressing these challenges. And we know there are those fighting to make us healthy. (Another heated discussion.) Yet we will spend more money fighting each other than cleaning our own bed.

I know that when Kennedy said we will send a man to the moon and bring him home safely by the end of the decade, joint efforts rallied and accomplished his directive. (Now, some think the moon landing was a fake. See, we don't know what to believe anymore.

Yes, and aliens are abducting us, there are colonies on Mars, people are drinking children's blood, and a woman became pregnant by a bullet that traveled through a man's scrotum and hit her in the belly.)

Have we failed to trust our intuitions? Have our eyes seen, and ears heard so much that we can't hear the still small voice inside us anymore?

Daughter dear had a great analogy regarding this division. We are thinking specifically when we ought to be thinking generally. Thinking generally allows a person to stand back to view the challenge. It will enable a broader perspective and thus a clearer head. Then we can approach the problem from a saner position. Thinking specifically is arguing about how many angels can stand on the head of a pin.

The Willamette River here in Oregon used to be so polluted that the fish died, and if anyone swam in it they would be risking their lives.  When companies stopped dumping waste into it, it cleared. Now it is filled with abundant fish, and sings its way down the mountain.

"Our problems are man-made--therefore, they can be solved by man. And man can be as big as he wants. No problem of human destiny is beyond human beings. Man's reason and spirit have often solved the seemingly unsolvable--, and we believe they can do it again."—John F. Kennedy.