How Long Since You've Used Pi? 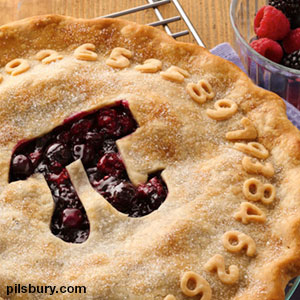 Pi, you know that magic number 3.1416 is conveyed by the symbol p. No pie crust, berries, or lemon custard, nothing as great as that, just a mathematical formula.

Why am I concerned with pi? My real Estate Studies made me do it. When calculating the Area of a circle, it is Area =p r2, where r is the radius of a circle multiplied by itself.

Who discovered these things--and long, long ago?

I suppose it will be handy should I ever need to find the area of a geodesic dome. Some irregular rooms can use a circle, but I don't want to go there.

If someone asks me to calculate the area of their irregularly shaped bathroom because they are putting down linoleum, I will scream and run in the opposite direction.

One of the questions the makers of this course asked before I began it was, "Can you stay calm when everybody else is going bonkers?"

My brain has turned to oatmeal this week in Junction City.

And how was your week?

Let's clear the brain... Did you read about the Finnish fellows having a pint in a pub and talking about their country?

They lamented that people didn't want to travel to Finland, their beautiful country with great utilities.

Well came the brilliant other, "The world is too noisy, and people are stressed by noise, so let's sell silence."

They agreed that people would pay to go to a spa and have a respite from the world's noise. Now their slogan is "Silence, please."

Sue, how long has it been since we visited Mother Meera, the silent Avatar in Germany?

Two friends and I had read about this young woman acclaimed as an Avatar, that is defined as a Deity in human form, and we wanted to experience her. She gave silent darshan. A darshan is simply being in the presence of a holy person. We three climbed aboard a jet plane, rented a car, and rummy from travel, with me as the designated driver, I drove in circles until we found a rot iron gate with a peacock shape built within it. That was Mother Meera's house. Why this Indian lady lived in Germany was a question we asked each other, but no one knew the answer.

Come evening, we attended a gathering of maybe 100 (maybe more) silent people sitting shoulder to shoulder on cushions. No one coughed, sniffed, cleared their throat, whispered, or talked. Silence spilled over us like syrup. One by one, we went up to the beautiful young woman dressed in a vibrant sari sunset colored. In turn, we knelt before her. She placed her hands on our heads, and it was said she was removing blocks.

When the evening was over, and we exited into the evening, as I moved my hands through the air, it felt soft and smooth and thick as though infused with gelatin. And the air pressed back at me just as softly. I thought, "I'm never going to speak again."

However, the memory of that evening did.

This moment of silence was brought to you by someone who has 3.141592653589793238 running through their brain, not to mention what in the heck is a habendum clause?

1949 — The first time a computer was used to calculate pi: the ENIAC (Electronic Numerical Integrator and Computer) was able to determine pi to 2,000 places. The calculation took 70 hours to complete. 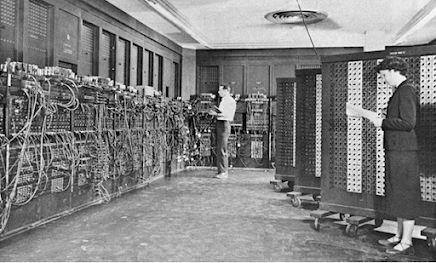