Long Ago and Far Away, or Right Now and Up Close 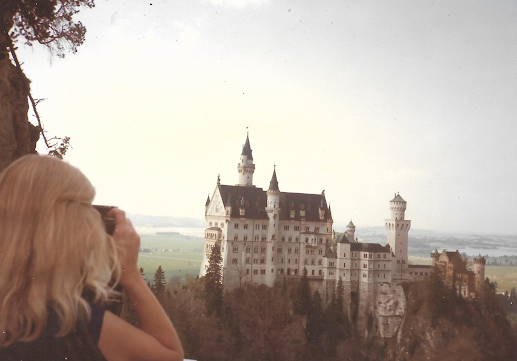 In a time when I had more hair, my husband and I visited the fairyland castle of Neuschwanstein. It was the one that inspired Walt Disney to build a castle in the middle on Disneyland--a magical place, and did feature swans, such as a gold swan faucet in a bathroom. On site I heard that they had running water fed from a water source at a higher elevation from the castle. And later on, I read that the castle had flushing toilets too. (King Ludwig died in 1816, before the final completion of the castle.) Magnificent paintings featuring scenes from Richard Wagner’s operas adorned many walls, and in the kitchen, there was a Leonardo di Vince device to warm the dinner plates. It consisted of a chain that could be pulled up the wall behind the stove. The chain had spaces for plates, and in using that device, the guests received their food warm.From the beauty of that castle and how much King Ludwig loved Wagner and swans and was determined to have it beautiful and perfect, I never bought the story that he was crazy. There is a mysterious story about him drowning in a lake while on a boat ride with his psychiatrist. Hum—sounds suspicious to me, especially since he had privately funded the construction, and a great amount of money was released upon his death.

I developed an infection while in Germany, and there at a hospital an English speaking young man checked me in. He told us he was doing community service in place of military service, for he was a pacifist. After hearing that we were from Southern California, he told this story: Once while surfing at La Jolla, California, he was hit in the face with a surfboard. He was taken to the hospital, where the doctors treated him with such kindness that he vowed to treat others the same.

A doctor gave me some medicine and said, “This is Wednesday. We’ll bill you.”

We were in Germany because my husband's company sent him to an Optics Trade Show in Stuttgart, Germany, and I was invited to go along. His job was to collect data on new instruments. My job was to eat, play and make merry. Oh, and to catalog what we spent on meals and lodging.

We made several other stops in other countries, but Germany was the most impactful. For, throughout my life, I thought I was German from my mother’s side of the family. She grew up in a German community, although she knew no German. However, my Great Grandmother was the first child of their family to be born in America and spoke broken English. The family immigrated before the war and I believe her mother endured that ocean voyage while pregnant—maybe she passed on my tendency to get sea-sick. It was, therefore, somewhat troublesome for me to visit a land that was the primary cause for the Second World War. I was expecting to see war-torn buildings.

I saw nary a one. I remember taking a walk one morning and stumbling upon a cemetery awash in flowers (It was May). Individual graves were fenced in with rot iron fencing, and there were so many flowers it was as though I was in a greenhouse. I watched an old man walk shakily to a faucet, fill a sprinkling can, and carry it back to a grave where he tenderly watered the flowers.

We rented a car and drove around the gorgeous countryside where cows stood on green hillsides, and yellow flowers dotted the green. Many immaculately manicured farms had their morning feather comforters airing out the windows. This was before down comforters were commonplace in the U.S., but most hotels on our European trip used them, and I became a fan. I have slept under down ever since.

The day following our castle visit,  I said, “Let’s drive into Switzerland. I want to see a land where blood never touched their shores.” And so, we drove until the Alps stopped us, and the picture of the little boy bringing home the cows in the misty evening is emblazoned on my brain, especially one cow. She was laboriously walking along behind the others and obviously pregnant. Finally, she stopped, gave a deep sigh, then carried on.

In Lucerne, Switzerland, I saw a sign printed boldly on a pharmacy. It was my Family name—the family that had migrated from Germany. The name was Hertenstein.

“See," I said, "My people lived in Germany for a while, but got out.” Not realizing that I had it backwards.

A couple of years ago, as a Christmas present, my daughter chased down our ancestry on my mother’s side. And to my utter surprise, I’m not German, but Swiss.

And Right Now and Up Close:

This morning, in preparation for the paperback edition of The Incredible Yellow School Bus, I wrote a dedication to my daughter Nina:

For my beautiful daughter Nina.

I wrote this story when my daughter was in the first grade and read it to her class. (It kept their attention.) Ever since, Nina has often admonished me by saying, “Mom, publish the school bus story.”

But I didn’t, until now.

It was my first fiction story of any length, and I thought I needed to learn more before anyone read it. Often, I would dink with it and make it worse.

Now, these many years later, Nina says to me, “Mom, sometimes a person’s first work is the best. And then we think we ought to make it a certain way and lose the purity of it.” See, she grew into a wise adult.

And then I wrote Incredible's sequel, A Journey Into Inner Earth, and that was a fun write and read.

Thanks Nina. This is for you.

It tickled my fancy.

Thanks Nina. This is for you.

While Amazon’s algorithms are somewhat of a mystery, it’s a known truth that when your book accrues a certain number of reviews, or a lot of reviews in a short amount of (unspecified) time, Amazon kicks into gear multiple promotions for your book. Free promotion that would probably cost a fortune if you had to foot the bill.

Every time your book is reviewed, the algorithms are updated, and your book’s internal ranking increases.

They say the magic number is 50 reviews. Wow.

So, my dear ones, if anyone wishes to add a review to my Amazon page, I will thank you profoundly.  The first FIVE people--kids or adults--to write a review for either or both books, will get a tee-shirt as a special THANK YOU. 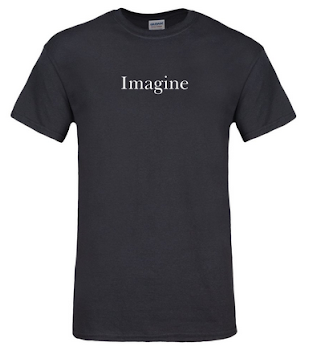 Want a different color than black? Tell me.

I’m providing links to review the books, for it took me a while to learn how to do it, and that will, hopefully save you time.*

To write a review for The Incredible Yellow School Bus, please click on the below picture: This will take you to the Amazon review page. 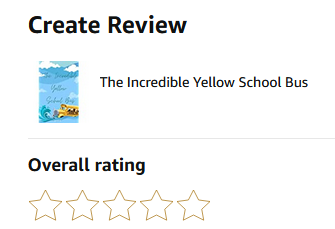 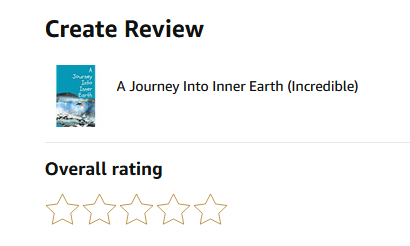 *To go Amazon's route, go to the item you want, SCROLL WAY DOWN on the left side of the page, past other books until you come to this:

Thanks for reading. You know I love you,