Have You Ever Run a Red Light?

I didn’t mean to.

I looked up, shocked to see a red light, for some stupid reason I didn't expect it to be there, I was only going two blocks.  Sure, it was pouring down rain, but a red light? I should have seen it.

And what in the heck was that car doing in the middle of the intersection? I slammed on my breaks turned to the left, thinking I would avoid hitting that car, but, Bam!

Nobody was hurt, except the vehicles. Her car, my truck—you know, my office on wheels. We have owned that truck for 20 years. It’s a Toyota T100. Repair people have told me to never sell that truck—it’s fixable…or was. Now, it may go bye-bye.

My Adrenalin kicked in and I had to sit a while to calm my nerves that had taken on a life of their own. And my little dog, Sweetpea, hugged my thigh and didn’t want me to leave the vehicle. But out in the rain, I went, wearing a light rain jacket that long ago lost its ability to shed rain, and decided to soak me to the skin. And then an angel appeared--a young woman came up to me and said, “Nobody was hurt. You’re alive. Take a deep breath, hold it for four seconds, and slowly exhale. It will lower your blood pressure.” It helped. She disappeared, and I was left wondering, “Who was that un-masked woman?”

Everyone was so nice. The two young women in the bashed-in car didn’t yell at me, the police were most helpful, the first responder deputy asked me what happened, and I blurted out: “I ran a red light!” So, he gave me a citation for not obeying a traffic signal. Afterward, I thought, “You didn’t see me run that red light.” But I knew I was at fault.

One day I was writing about how we create our own reality, and the next day I crash. What is this?!

Strange that the other vehicle driver and I both live in Junction City—a few blocks from each other, we were both in Eugene on a black, wet night at 8:30 p.m. We were both at the same place at the same time--not a good way to meet.

To add to my state of mind, minutes before I left, I saw on the internet that Charlie had died. That impacted me severely, as though one of my own animals had died. I read Sheve Stockton’s account of his last days and felt such grief. Charlie was a coyote, raised from a pup by Sheve. After reading Sheve’s book, The Daily Coyote, I read her blog and followed their adventures for eleven years. I had some emotion invested. I should not have been on the road.

Charlie was 14, I suppose that’s a good age for a dog or a coyote, and I used to worry that someone might shoot him—seeing a coyote, but he made it through to old age. He was beautiful. That shiny full coat showed how handsome a loved, cared for, and well-fed Coyote can be. I would send a picture, but Sheve is a photographer and one must get permission to reprint one of her photos. She’s an excellent writer too.

Her partner brought Charlie home to her one day, rescued after his mother was shot. She began photographing him daily and sending pictures home to her family.  Her book, The Daily Coyote was born from that. Charlie played with the dog they eventually got, and the cat, and roamed the farm with Sheve among the cattle and calves. There are many of her pictures on the internet.

I thought going out in the truck, running a couple of errands, being away from people, and bringing home Kentucky Fried Chicken would calm my beaten soul. 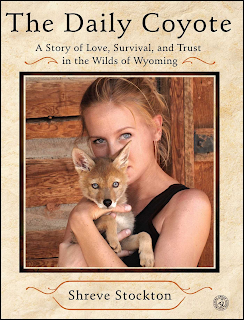 I guess it’s okay to use this image since it’s of a published book.