I'm Working on It

After I mentioned Howard Beale"s speech from the movie Network last week, I got this from a reader:

‘Speaking of leaning out the window....I'm reminded of Jason Robards in 1000 Clowns...
Murray: [Leans out his apartment window] This is your neighbor speaking. I'm sure I speak for all of us when I say that something must be done about your garbage cans in the alley here.

[raises voice]
Murray: It is definitely second-rate garbage. Now, by next week I want to see a better class of garbage, more empty champagne bottles and caviar cans! I'm sure you're all behind me on this. So let's snap it up and get on the ball!

Last Saturday I should have asked for two brochures from the Tesla Dealership so I could throw one in the garbage. That would be classy garbage. Now I'm working on emptying a champagne bottle.

On Saturday my youngest daughter and I traveled to Portland. We stopped along the way to take in a Tiny House show, and then on up to our newly discovered favorite lunch, the Thai Lettuce Wraps at the Cheesecake Factory. All the vegetables are so fresh, the chicken is seared just right, and the three sauces make it perfect. I suppose it’s meant to be an appetizer, but we each order one. It’s our main meal.

After lunch, we wandered into the Mall and I was attracted to a fiery red Tesla car sitting in an open showroom. A red car with seats the color of new-driven snow. Jazzy. As I was snapping a picture of the dash--that had no dials, no speedometer, no clock, no anything except a slit that was the air vent, a salesman slipped into the passenger seat beside me, and asked if I wanted an explanation of the car. 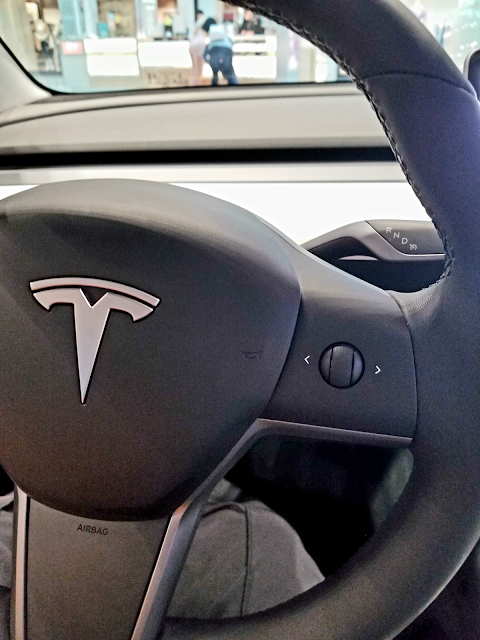 Well okay. I was sitting in his car after all. 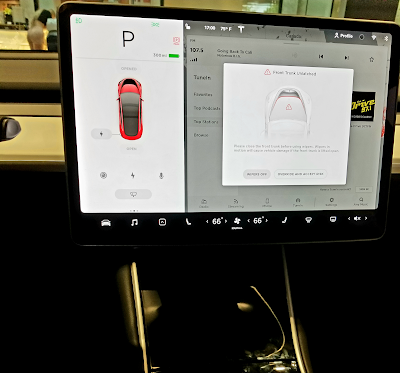 A display screen sat directly in the middle of the dash--ha ha, dashboard, an old term for horse and buggy days, a protective device to keep the mud from splashing on the wagon's inhabitants. That car probably had a device that would spit on mud splatters, and then a little rag would come out and dry it off.

All of the car controls, except for steering and gas are done on that screen--Oh, it will do that too, drive that is. That car will drive itself and skitter into a parking place without any help from you. (You do need to take hold of the steering once in a while so they know you’re still alive.)

The salesman  proceeded to explain the bells and whistles that came standard on that car. It never needs maintenance he said, it never needs the brakes replaced, and it will travel 350 miles on an electric charge. If you are sitting in a restaurant and it gets to be 110 degrees outside, and who knows how hot inside your car, simply remotely set the car's temperature at say 72, and a cool car will be waiting for you.

“What about a dog in the car?" I asked. Well, that’s taken care of too, set the temperature, the battery will run the air conditioner, and a notice will pop up on that mammoth display screen, “Dog in car. The temperature inside is 68 degree.” Anyone snooping through the window, or a policeman checking, will see that you have taken care of everything.

“How much does the car cost,” I asked.

“What?” I exclaimed,” that’s less expensive than the Chevy Silverado I looked at last week.”

This isn’t a Tesla commercial; I became interested in electric cars when my eldest daughter bought one—not a Tesla, and I found that you can travel across the country easily from charging station to charging station. It’s all mapped out for you.

I commented that I never see a Tesla on the road, or else I don’t recognize them. They rather fit in with other sedans. My thought is they ought to stand out as a Ferrari did in the seventies. (That red one stood out. When I asked how they kept those white seats so clean he answered, “You know how many people sit in this car each week? The seat upholstery is made of recycled pop bottles and mushrooms." (Mushrooms? I still don’t have the answer to that one.)

And then coming home I came up behind a car in the I-5's center lane going exactly 65 miles per hour. “It’s a Tesla,” my daughter exclaimed. I followed it for a while as it stayed steady in the center lane at 65 mph.” I bet they have the speed control set,” I said, “This Prius is going to pass that Tesla, Check when we go by to see if an old person is driving it.”

Nope. It was a couple of young people dancing. A pillow covered the steering wheel and arms were waving all over that car. They were partying hardy.

Take a lesson from the kids. Party hardy.

Come on, I expect to see some classy garbage in your bins this coming week.
Posted by Jo at 7:09 PM