A Story To Tell 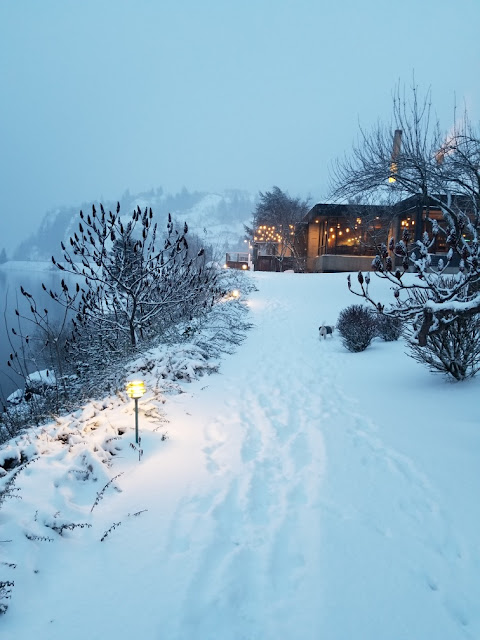 As I write this, I am sitting in a toasty Hotel room overlooking the Columbia River that is  all gray and forlorn looking this morning as it races toward the ocean.

I have a ground floor room with a sliding glass door leading out to a grassy strip that has a skim of snow on it, and beyond is the River. My view is because of Sweetpea my little dog. People with dogs get a ground floor and an exit outside to the grass. A nice dog-friendly hotel.

My daughter at home took four days off work so we could make this trip, as I am normally at home with my grandson. But today, I am here.

I have this room because we thought we were going to a memorial on Saturday in The Dalles, about 25 miles away.  I wanted a couple of days as a writing retreat, so I
booked a room for Thursday and Friday and then for Saturday when my husband and eldest daughter would join me.

Severe weather warnings frightened people off for many were driving from a distance away, and so my brother postponed the memorial.

My daughter opted out. My husband decided to reschedule our time in The Dalles—with his family. So, here I am. Perfect. Now I get four days instead of two.

I’ve been asking for this—time to myself to write and read. Time alone with only my dog and myself to care for. I feel as though I am in a scene from the movie Mary Poppins where she interviewed with Mr. Banks for their job as nanny while outside a North wind came and blew away the competition.

Remember nannies sailing through the air, skirts billowing, feet in the air, umbrellas turned inside out?

Whoops. I blew it.

My idea is that we want to be successful at whatever we decide to do, be it blogging or whatever. First, you have the idea, but if you don't believe it's possible what's the use of it?

I wanted to plant a belief in the person reading my course that they would go out and rock the world--or at least have a damn good time of it.

As I watch the river, I see a little duck, tiny in that immense stream, paddling upstream. At first, I thought he/she (I can’t tell which), was staying in the same spot as the current flowed steadily past her little body.  Now, that’s a strong current and a big river while that duck is but a teeny little-feathered creature with only her internal insulation to protect her against the bracing cold. Soon she had moved across my view of her. I don’t know how she is managing, but clearly, something she or he, wants is upstream, and that little duck is determined to get there.

While I don’t want to be foolhardy in staying here instead of going home before bad weather breaks, this is too good to pass up.

If you hear that I was lost in a snow bank, know that I went out happy.

I made it home with a truck bed of snow--I told my Grandson I brought him a present, for he told me the other day he didn't remember seeing snow. California and Hawaii will do that to a person. Coming home on Sunday, the road in the Columbia River Gorge was a bit of dicey from Cascade Locks to Multnomah Falls. there snow frozen on the road had been torn into chunks and frozen in place. The truck rattled over it as though we were driving one of those lava-infested roads of Hawaii. The lady in front of me was going 20 miles per hour, but we made it through the bad area without either of us ending up in a snow bank.

The entrance from Portland into the Multnomah Falls parking lot was full, so I guess people drove from the West where they had little snow to the East where the storm hit--probably curious to see if the Falls had iced up.  Nope, still flowing. By Gresham, right outside of Portland, the roads were clear. so I drove on into Portland to my favorite Elephants Deli and there saw the white peacocks. (Okay, they're toys, stuffed, but cute as bugs ears.)

The peacock is my totem animal, and seeing one makes me feel that I am on the right track. When I saw one--a real live, gorgeous male peacock sitting on the fence outside our bedroom window shortly after we bought our present house, I came unglued yelling for the dog, "Sweetpea. Come look!"

I would never have thought I would see a live peacock in the sleepy little town of Junction City, Oregon.

That little bird in the picture below came in while I was outside, and drove the dog bananas, but all survived unharmed. I caught the bird once, took its picture, but he wiggled out of my hand before I could open the door. He made a bee-line to the area under the bed, where, because the bed was only two inches from the floor, he was safe from Sweetpea and the big monster--me.

Why is it that a bird will fly through a small opening into a room, but can't find its way out of an open door?

One of the mysteries of life.

Finally, he found his way under the draperies again where I caught him.

P.S. I hope you didn't get that exuberating spray on you face from the last blog for your face would have been flash-frozen. 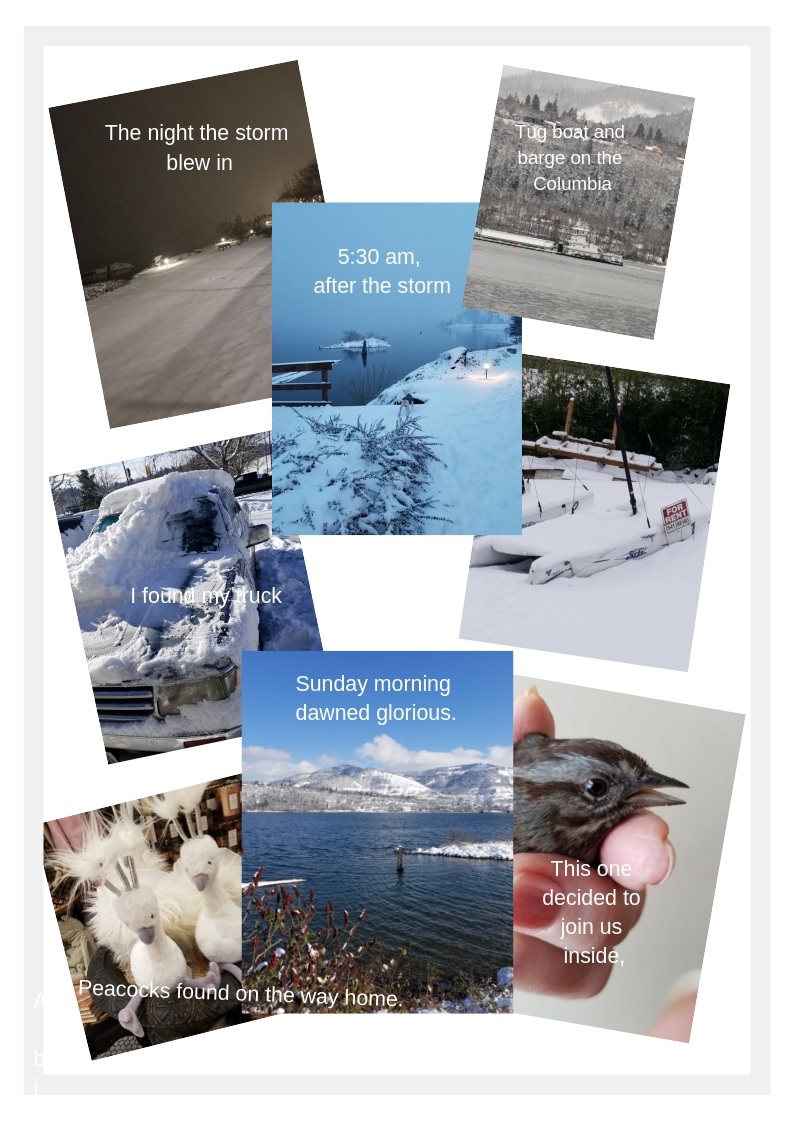