I had never heard of Pahoa Hawaii before we moved there five years ago. We bought ten gorgeous acres with an acre of pineapples, some citrus, a macadamia nut orchard, room for horses, a main house and the cutest little Tiki Room we could imagine.  We were at the end of the road—or so we thought.

Later we learned that at one time Railroad Road went all the way to Hilo, but right beyond our gate debris blocked any vehicle from going farther.

Railroad Road also known as Puua Kapoho Road has been made into a through-a-fare; well maybe I exaggerate, but it has been made passable as an escape route for the people of Pahoa. We remember it as two miles of lumpy, lava encrusted, pot-holed infested road that beat the heck out of our Prius. It consisted of a single lane where we would pull over to let another car pass and therefore wave at our neighbors. About fifteen mongooses would do the squirrel scurry across the road before we got to the highway, and at night stealth wild pigs would run their little wiggly tails down the road before disappearing into the brush. Now Railroad is a two lane road, and our house which was once at the end of the road, no longer is.

Fiery hot lava is threatening to cut the town of Pahoa in half and close off the highway, the road out of there, thus they have widened Railroad Road as an escape route.

We sold our house and property on the island thinking it was not safe, and moved back to the states. Now the marketplace in Pahoa where we shopped, where we went into peals of ecstasy over the Bakery’s Butter Mochi, where we shopped at Malala’s  grocery store, where Island Crazy sold Barry’s paintings, and Island nick-knacks, and who took one of my books on consignment (sold it), is at risk. In that shopping center we frequented the propane store, the hardware store that once sold a bouquet of orchids for $2.99, the tire shop, The FEX X, where we FAXed more documents trying to get a loan on that property than I care to count, the Urgent Care Facility where they took good care of my husband, the Fish and Chips café, the Subway Sandwich shop, and the Sushi Restaurant—are all at risk of Pele’s hot lava.

The turn-off into the shopping center is highway 130, the highway to Hilo, and numerous other places on the island that I mention in my book, like the drive to Kea’au, and Black Sands Beach, and Kona— which was “Going to Hawaii,” for us, could be completely bisected by the lava. Long’s Drug Store, fancy and new, was being built as we were leaving, closed recently.

Barry, the caretaker who lived on our property before us, called it “The most beautiful spot on earth,” and the name given to it by its owner was Pu’u Honoa, meaning “Mount of Refuge.”

Maybe it will be just that for the people who travel the road in front of our house, (that is someone else’s house now), and thus escape Pele’s fiery ability to make more land by pulling it from inside the earth and depositing it on the surface.

I wish all those stalwart souls well, and please watch out for the critters. 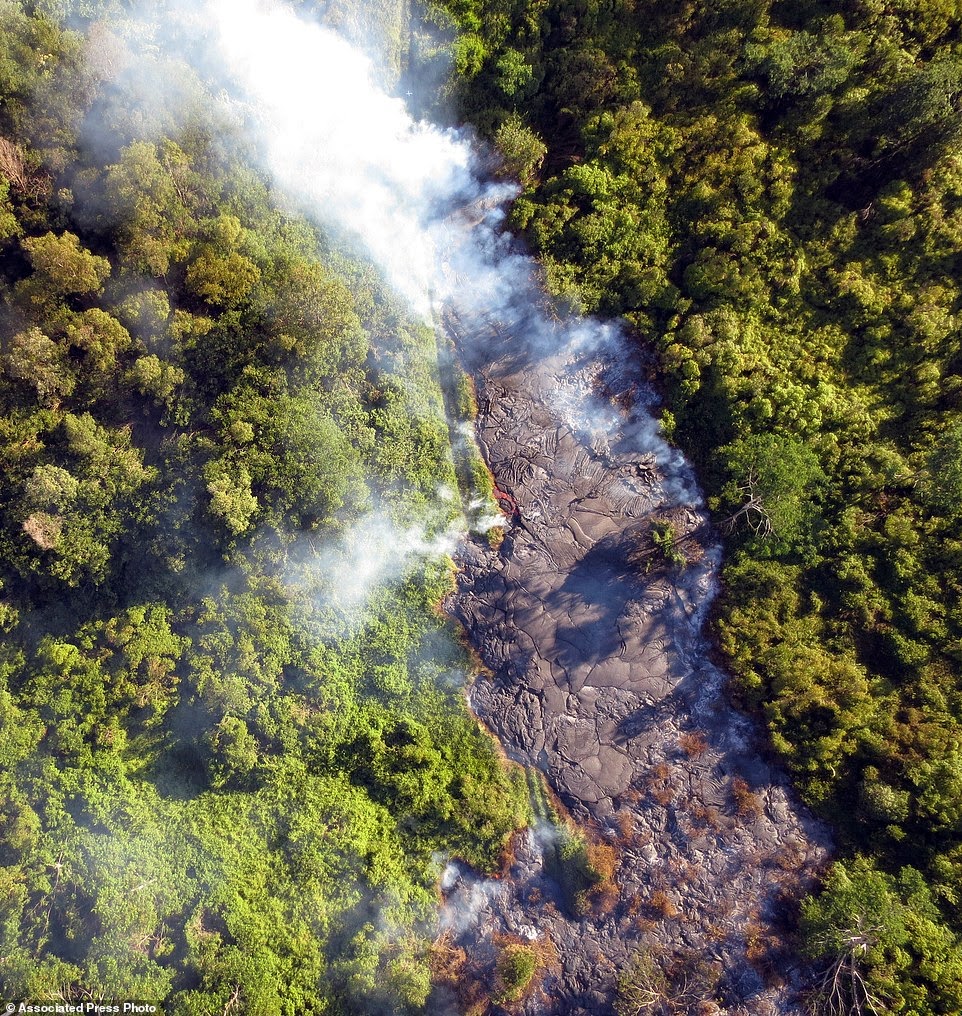