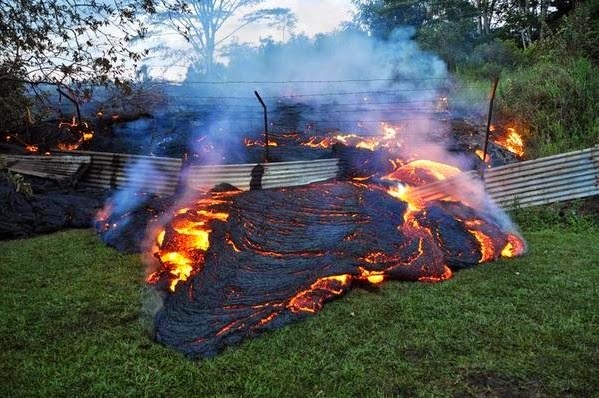 Could this have been our back yard?

I had never heard the word #Pahoa, or knew a town by that name existed until we moved into its vicinity. And now I am watching via Hawaii videos as a river of molten lava slowly creeps upon the quaint little town of Pahoa threatening homes and shops.

Cemetery Road our passage to the Transfer Station, where we dumped all that extraneous stuff we found on our newly purchased property, has been cut off already.

I wonder if Mr. and Mrs. Chiropractor are still there above the dress shop with their little balcony where Baby Darling and I stood and called out the colors of the cars that streamed below. Mr. Chiropractor wanted to move off the island, but Mrs. Chiropractor said it was the first time she had a house of her own. They had built a kiln for her there, and there she worked as an artist making tremendous ceramic wall hangings and tiles. Their office and home was a virtual art gallery.

Across the street there was a Cash and Carry store where Husband Dear and I stopped one day after a Chiropractic visit and while standing in line I casually commented that I forgot to tell the Chiropractor about my over-worked sore thumb. The big burly Hawaiian man at the counter said, “Do this.” And he placed his index finger and thumb together in a circle and pushed. “Hold it for a minute,” he said. I did, and the muscles in my thumb relaxed, and it felt much better. That was Aloha. Do good without expecting anything in return.

The pizza shop on the main street made great pizza, and across the street we often frequented the Mexican restaurant that made good food, but not so good guacamole—they use the wrong kind of avocados. The kind they grow on the island are round and buttery. Someone should introduce good Haas avocados  I sincerely want those shops to survive.

There was the used book store where the proprietor was wiping down the books with #Windex to combat mold. (Take books when you go to Hawaii.) And at the South end of town there exists Kalia’s Resturant. It doesn’t look like much on the outside, but the inside is exquisite. The interior is painted red and a beautiful bar extends down one side. Every time we frequented Kalia’s a huge bouquet of Star Gazer lilies graced the entrance, and their fragrance wafted past our nostrils reminding us that we were on a land some call paradise. Their food was so good one reviewer ate there four times in one week.  Daughter loved their ribs. I loved their fish.  On the weekends they featured live music.

Some call Pahoa an eatery town. If you are ever there, go to the shopping area by Malama Market and there in a little pastry shop (left side as you enter) buy butter mochas—my mouth waters at the thought. Their mochas are made with rice flour and copious amounts of butter. They are baked in a pan then cut into squares. Besides tasting exquisite, their unusual chewy texture makes them fun to eat. (Recipe anyone?)

Greg Kahele wrote this: “I am a retired special education teacher from Colorado. I am moving to the area when I retire. I chose Pahoa specifically because the people were so friendly and sharing. A friendly young man I met told me that this was the only place he could "live in his own fur" and I decided I wanted to come to the Puna district and live in my own fur as well. Only sales pitch I needed!

She was a big Hawaiian lady flown in from Honolulu years ago, and is accredited with stopping a lava flow before it destroyed Hilo.

Authorities aren’t going to try to divert the flow.
"No matter how you would turn it, you would direct it toward someone's property,"

A lei in the path

Josiah Hunt who has farm in a part of Puna that is not immediately threatened, described smelling burning grass, feeling warmth from the lava and hearing “popping and sizzling and all the methane bursts that are happening in the distance … mixed with the birds chirping and the coqui frogs.”


Hunt watched last week as the lava crept toward Pahoa and saw a woman whose house is near its path put a lei at the front of the flow. “It helps a person come to grips with the reality of the situation,” he said. “I found it to be oddly comforting in a really strange way.”
Posted by Jo at 10:19 AM