The Stuff Dreams are Made of

In 1938 it wasn’t Franklin Delano Roosevelt, Hitler or Mussolini that commanded the headlines. It was a little crooked legged horse named Seabiscuit.

Read Laura Hillenbrand’s skillful, exquisite  book  Seabicuit  for a an account of an underdog that inspired a nation.

A little horse with crooked legs who liked to sleep more than anything was used to train other race horses to win, by letting them. That is until a former cavalry horse trainer, and a crippled one-eyed jockey taught him that he was the winner.

In a match race against the proposed fastest horse in American and Triple Crown winner, War Admiral, Seabiscuit left him in the dust and gave the country something to think about except world conditions.

I’m back watching horse races after a few year hiatus, and rooting for the little guy. 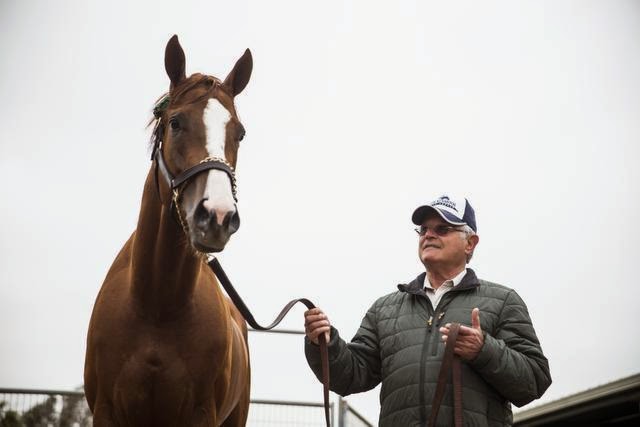 I don’t know which inspired me the most, California Chrome or his 77 year old trainer. I first read that Art Sherman was 85, that inspired me, but checking, I guess he is only the kid of 77. I was figuring I had a few more years to come into my own—just lost 7 years. In 1955 he was an exercise jockey for the Kentucky Derby. This time he was a winner of it.

Okay, here is what inspired me:

California Chrome’s owners bought his mother, Love the Chase, for $8,000. Some told them that was too much for a horse that had won only one race. They bred her for $2,500, and she produced California Chrome. So for $10,500 they got a race horse that won millions.

The trainer Art Sherman said that it takes 11 days for a horse to recover from a race with the magnitude of the Kentucky Derby which he won.

Two weeks later he won the second leg in the race to the Triple Crown, The Preakness, and that was including his 11 day recovery and traveling over 2,000 miles from the west coast to Maryland on the East Coast.

I heard that the morning of the race he had a cough. I said, “Well, as with the stories of the great race horses, they had an injury or something that further handicapped them.” He won anyway.

I bet on him, won $80.00 and took my family to celebrate at the restaurant PF Changs.

P.S. Feel like shouting? Go to the little wolf picture below, click, and give us a shout. The Sacred Wolf Pack is a place for creatives to meet and mingle. Ta Da.
Posted by Jo at 1:21 PM