“Let’s call it a condensed house instead of a Tiny House,” says Daughter Dear.

Yes, it needs everything a big house has, electrical outlets, every three feet, outlets 18 inches above the countertops, plumbing, heat, hot water, running water, a toilet—all scrunched together into a little bitty space.

Daughter Dear and I, enlisting Husband Dear’s help on occasion, have bought a Tiny House that looks good on the outside, but was all 2 x 4’s, wiring and insulation on the inside.

Part of its allure was that some of the work had been done.

However, the electrical system was not sufficient for the complete house, so we hired an electrician to amp it up.

They couldn’t prove the wiring was up to code, so they ripped out the wiring and replaced it—that was after the insulation came off. First-round.

Second round: call back the electricians (one plus and apprentice), for the outlets were right where the countertop should be.

We changed the floor plan and a second electrician came and adjusted our wiring.

Time for the plumber.

Since the house’s floor joists are sitting on a gravel base, there is no crawl space beneath the house, and the plumber wanted the pipes to come up through the floor, However, he thought he could cap off the pipes and pressure test the water inside the house. Later we would add the drains.

Schedule the work to be done.

Daughter keeps checking the building code books, which are like reading a congressional brief, but there she found that the loft measured 6 foot 4 inches from floor to ceiling, exactly what was required. However, that didn’t take into account the flooring—that we plan to tile, and the ceiling drywall that she plans to place. That would make it under the required specifications, so we decided to take out the loft. (I hate climbing up there anyway, and it is tight to the ceiling.)

All the previous owner's good work--gone.
They say to have a plan and stick with it, for every change is expensive, but hey, we’re winging it.

Now we plan to build a raised floor, covering two-thirds of the house, and place the bed under that platform.

There will be exactly enough floor space to slide out the bed at night. Morning bed-making will be to simply push the bed back into its den.

The bathroom will be in the remaining one-third.
Call back the electrician who says he is there to serve, bless his heart.

Out with the can lights that were under the loft that will be gone. He moved and raised some outlets to account for the raised kitchen, and revamped bathroom.

Okay, we’re set.
The plumber came to begin the plumbing work, but, as we had changed things, he got cold feet and upped the price to twice what was originally planned.

He wanted us to drag the house back out from where it is parked under a roof originally meant for an RV, a space Husband Dear had excavated to lower the floor.
Parked where it is will allow us access to electricity via the garage in our Wayback building. And that garage will allow us workspace—and a place for the table saw, the tile saw, and materials, all out of the winter rains.

“How about if we put the plumbing on hold until we firm-up our plans,” I said. When in truth I wanted to say, “No way!?”

I had mentioned exposed pipes to him, and he thought that would be tacky.
He must have been thinking of cheap plastic piping running through the house.

We’re thinking of jazzy copper pipes as an accent piece.
So that’s what we have decided, finish the walls and retrofit all pipes. (Drain holes and vents will be taken into consideration.) Daughter loves steam-punk but thought that would be too weird. I say steampunk modified, could look great.

The nature of tiny houses is to be creative. I think that’s the reason people love them so much.

I can’t wait for the second installment of this story... 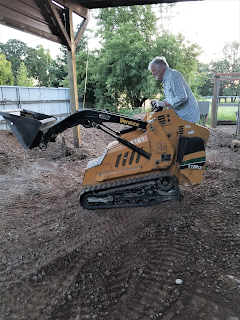 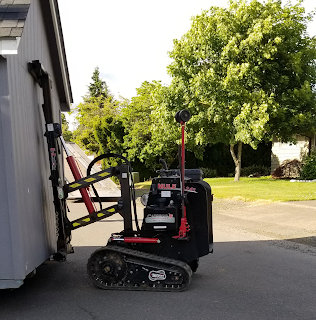 This is the mover's "mule," a remote controlled              Husband Dear, clearing a way.
tractor that can place a house withing on-half
inch of where you want it. 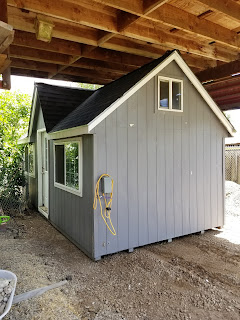 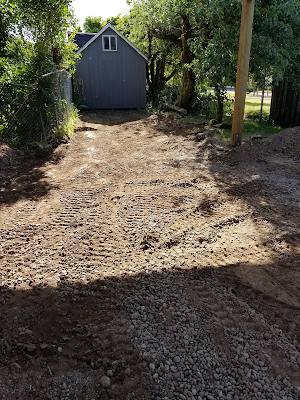